This training is based on the needs identified in the LELP commissioned CAF Built heritage and Opportunities report, ARUPs Conservation Land Management report and a recent audit of other initiatives being delivered in the area. Training will be made available to LELP volunteers and the wider community. 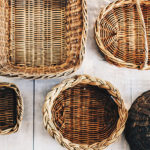 The Lough Erne Landscape Partnership (LELP) seeks quotes from suitably qualified organisations/individuals for the delivery of a series of willow weaving courses.

Connecting with the skills of the past

A fabulous evening was had by all at ‘Connecting with the skills of the past’ hosted by Lough Erne Landscape Partnership, at Enniskillen Castle Museum.

The event was well attended and celebrated skills from the past once common throughout Fermanagh such as willow weaving, spade making and lace craft. This also marked the launch of the Lough Erne Landscape Partnership Heritage Skills project which aims to engage people in heritage skills such as willow weaving, boat building, thatching and many more.

Guests were entertained by music from Fermanagh School of Music and Performing Arts and Churchill Silver Band. Speakers on the night included, Sam Morrow who discussed the traditional farming skills in Co. Fermanagh and followed by Helen Walsh on the delicate craft of Inishmacsaint Lace. The extremely interesting presentation on Fermanagh’s former spade mill and the McMahon spade, delivered by Oliver McCaffrey (Roslea Heritage Association) & Tom Mahon & James McCullough (Patterson’s Spade Mill), was very poignant particularly as the sons of the late Heber McMahon (owner of McMahon’s spade mill) were in attendance.

Roslea Heritage Association and Patterson’s Spade Mill displayed examples of traditional spades and spoke with guests about these rare and treasured possessions. In addition, there were displays from Inishmacsaint Lace, Fermanagh Beekeepers Association and Enniskillen, Lisnaskea and Belcoo Men’s Shed.

“It is magnificent to see such great attendance here tonight, bringing people together to connect with the heritage crafts and skills that were once so prevalent in the Lough Erne Region. We are delighted to officially launch our Heritage Skills project and look forward to hosting future events that will give participants the opportunity to connect with the heritage of the region and learn skills to keep the skills of the past alive in the future”

LELP have been working with local groups including Lisnaskea and Enniskillen Men’s’ Shed and Belleek Women’s Shed to teach participants the skills of willow weaving.  The workshops were taken by tutor Tom O’Brien and many of the items made in the workshops including baskets and bee skeps were on display in the castle.

Throughout the workshops participants have been weaving bee skeps which will be used by the Fermanagh Beekeepers Association as part of their Wild Bee Research Project, supported by LELP and the Eva Crane Trust.  On the night David Bolton from the Fermanagh Beekeepers Association provided an overview of the project and was delighted to be presented with finished bee skeps by members of Belleek Women’s Shed and Enniskillen & Lisnaskea Men’s Shed.

The event was supported through funding from the Public Health Agency through the CLEAR project and the National Lottery Heritage Fund.

If you want to subscribe to our monthly newsletter, please submit the form below.